Kayak Fishing Down Under

Kayak Fishing Down Under

With the start of the bass season came the first day of the BAS license to access a lake i've wanted to fish for a while. Just over the road from Kurwongbah, my usual haunt, lies a much bigger lake with wildly varying terrain. Skinny in the northern reaches and deep at the bottom end, with much steeper banks, standing timber, sunken bridges, and completely different vegetations, North Pine Dam presents a unique fishing opportunity, and a unique mix of fish.

Our first trip out was on the 2nd, and was more of a recce (he says, retrospectively). We both scanned the lake to build a garmin contour map up as we worked from the launch down to the bottom end, where the winter fish apparently hold in large schools. Unfortunately it seems summer had kicked in early, because the fish were few, but still of decent size. Next time out, we head north and fish the fun summer style...

We hit the water at 6am on the 9th with mist still heavy on the lake, peeling away like fairy floss as the sun touched more of the water. 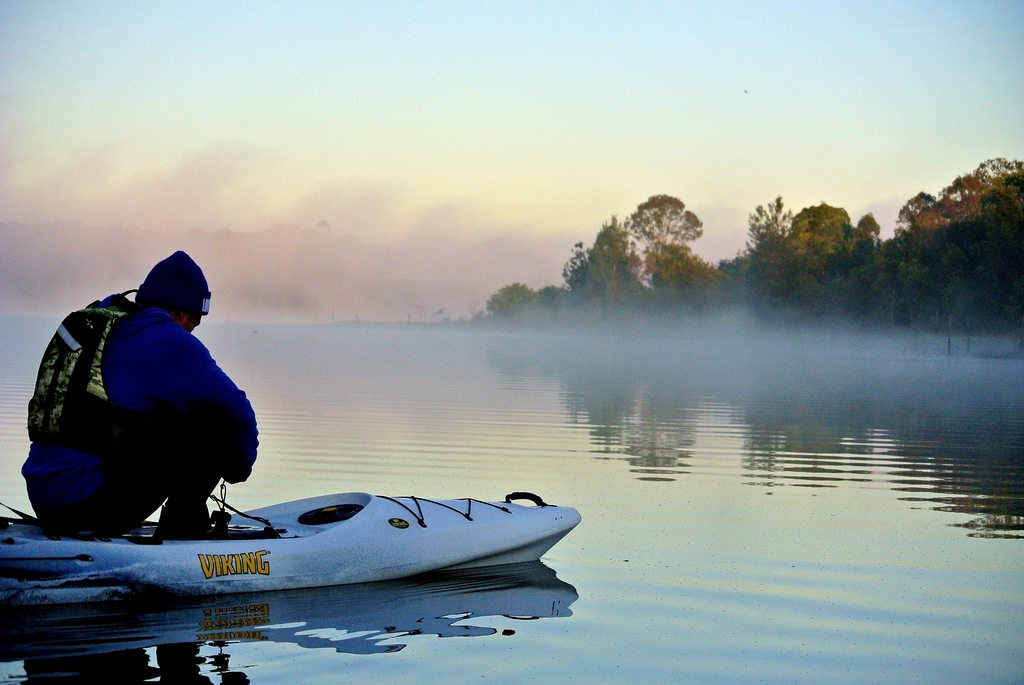 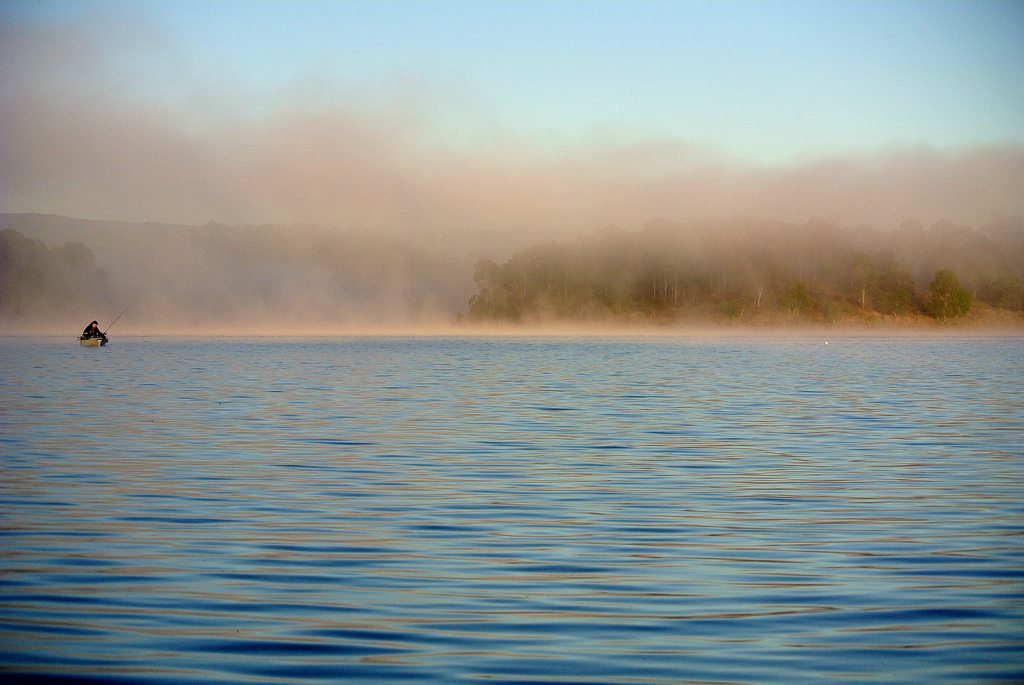 Turning right out of the launch point and sticking to the shaded side of the lake, we stopped to fish the points of a bay/creek which featured a nice dropoff and some timber. Bouncing a 12g Nories Wasaby up the dropoff produced the goods, and i was on the board with a small 30cm bass only 15 minutes in. 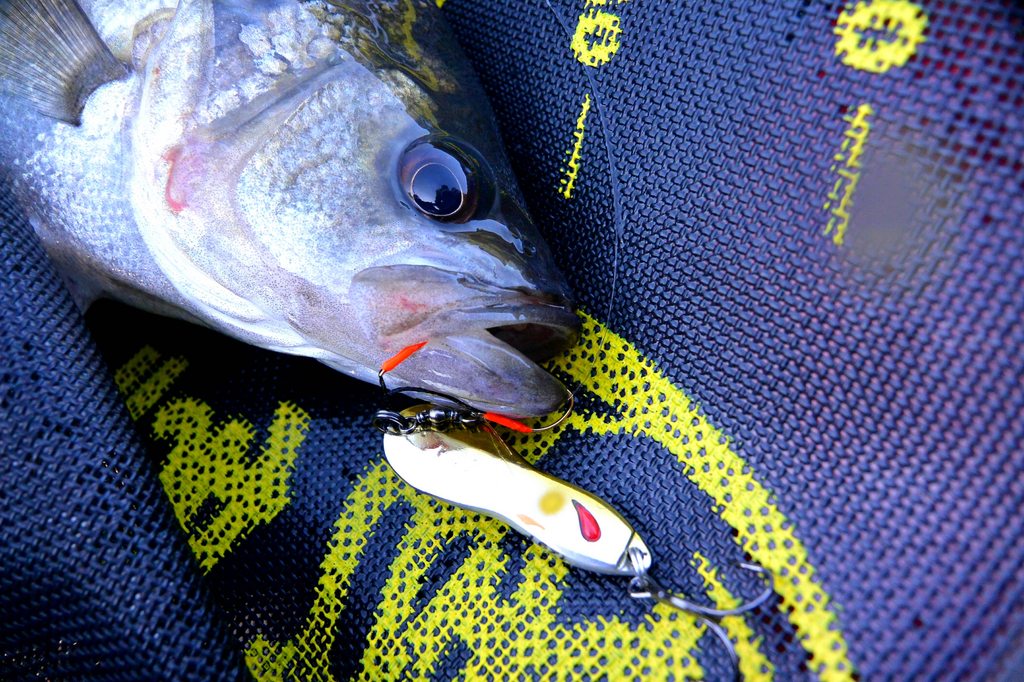 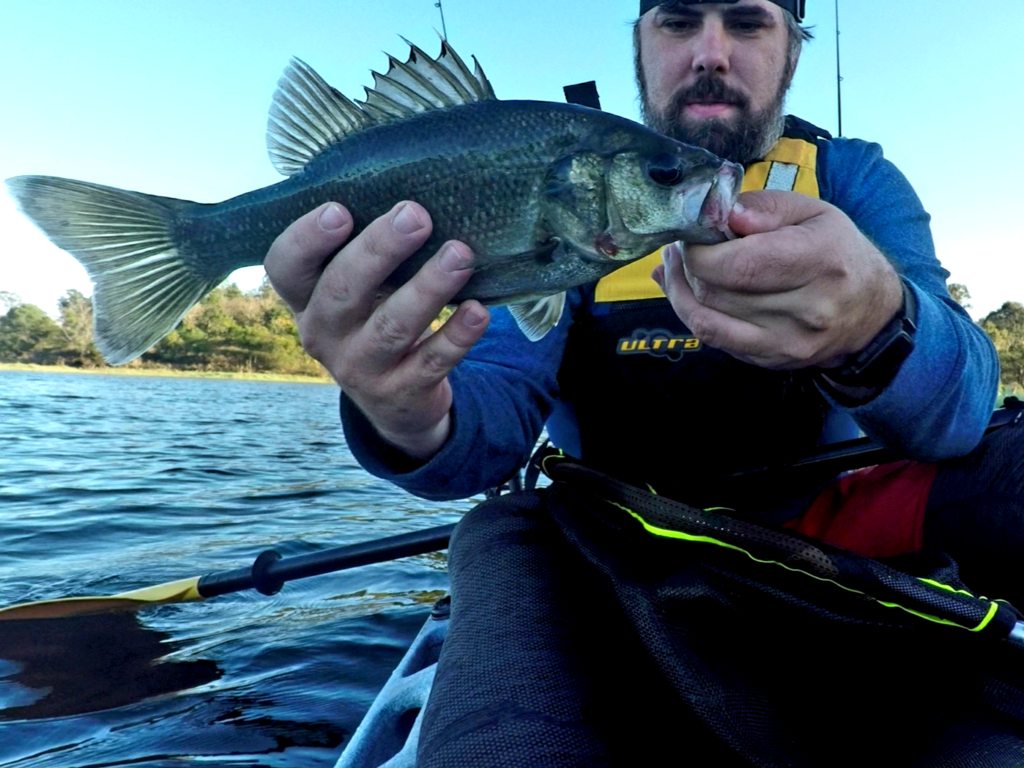 Anyway, while i was working the bottom my mate was flicking a little deep diver between some timber and a lone tree. On his second cast at the tree he was on, and despite the lacklustre fight, a whopping 54cm golden perch was boated shortly after! This is the fish we come to NPD for, you just don't see them in Kurwongbah like this! 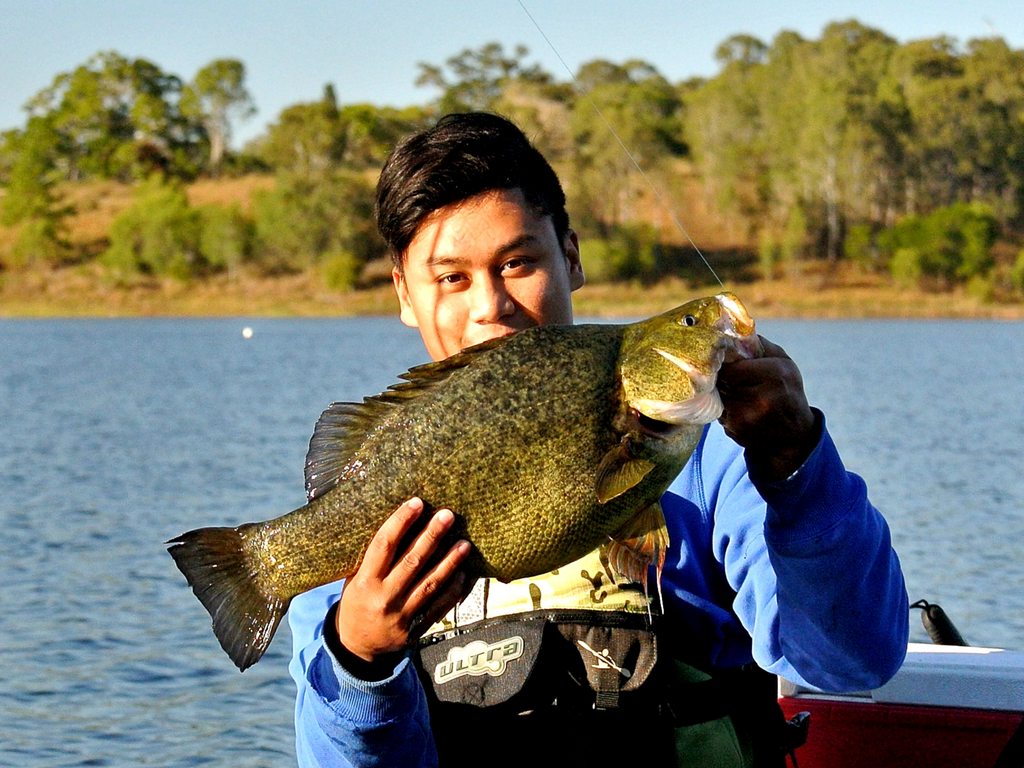 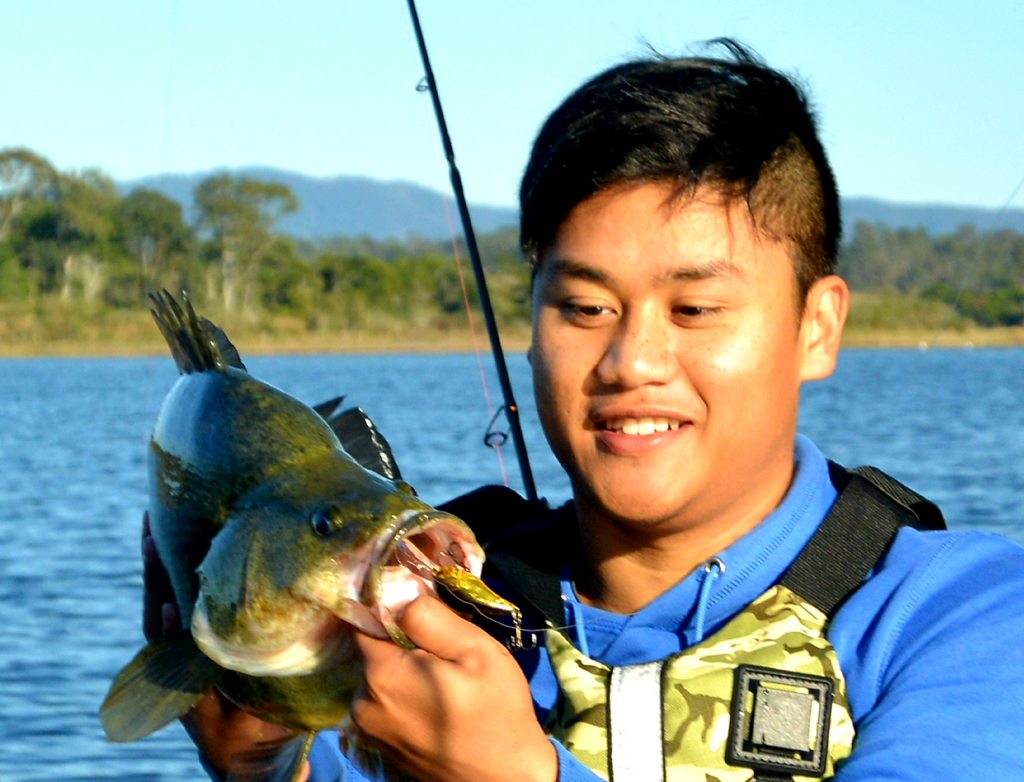 On closer inspection, the greedy pig had also just inhaled a full-sized redclaw, its whisker sticking out of his gullet still twitching away... 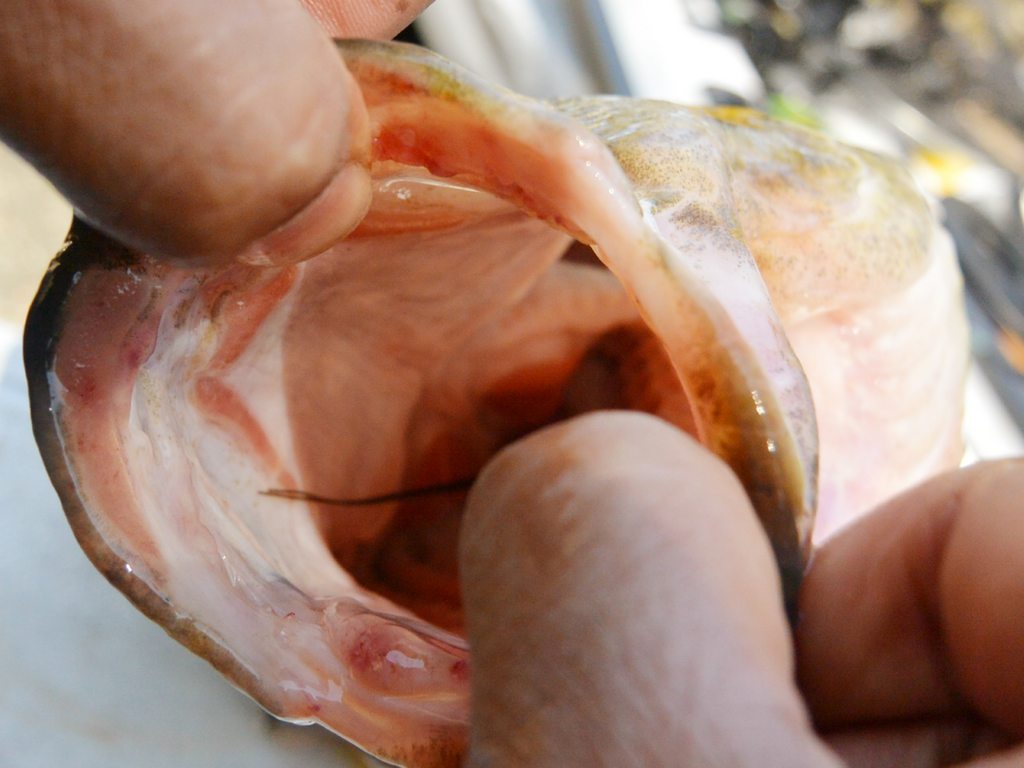 Look at this slab! 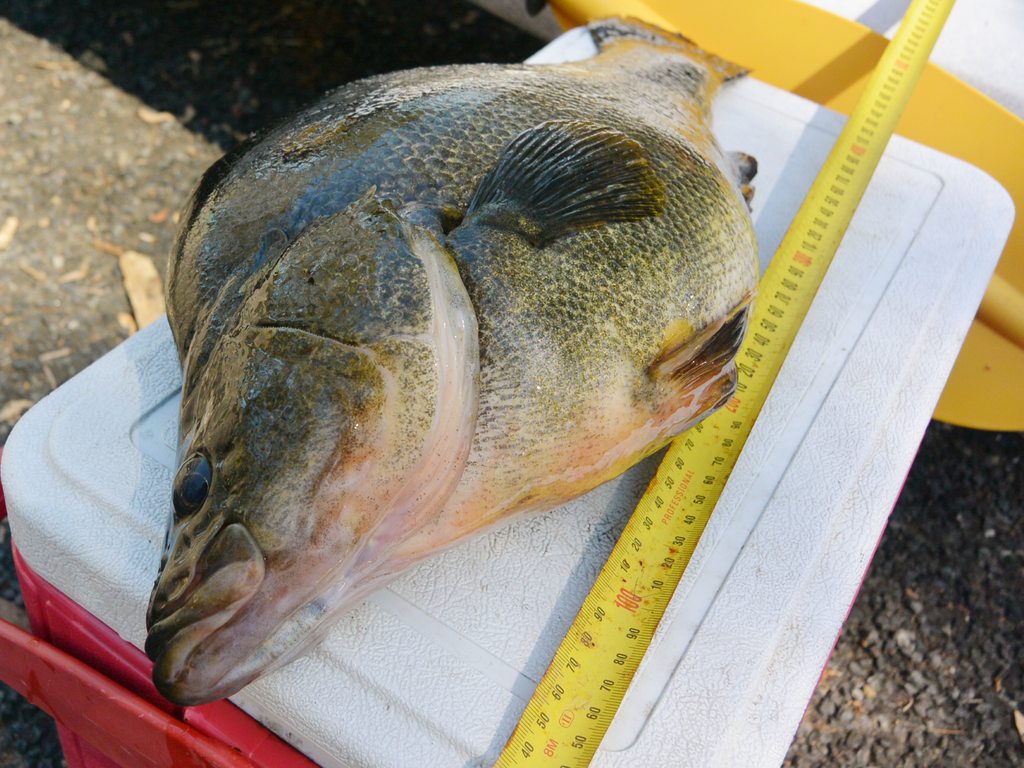 After that bit of fun, we kept working north towards the sunken bridge. I picked up a few bass between 30-40cm on the troll, using a Jackall Squirrel DD 79 i had set up to slow sink for mangrove jacks by fitting it with giant trebles. It didn't seem to deter the bass, with many hits coming from lure when it was sitting motionless. 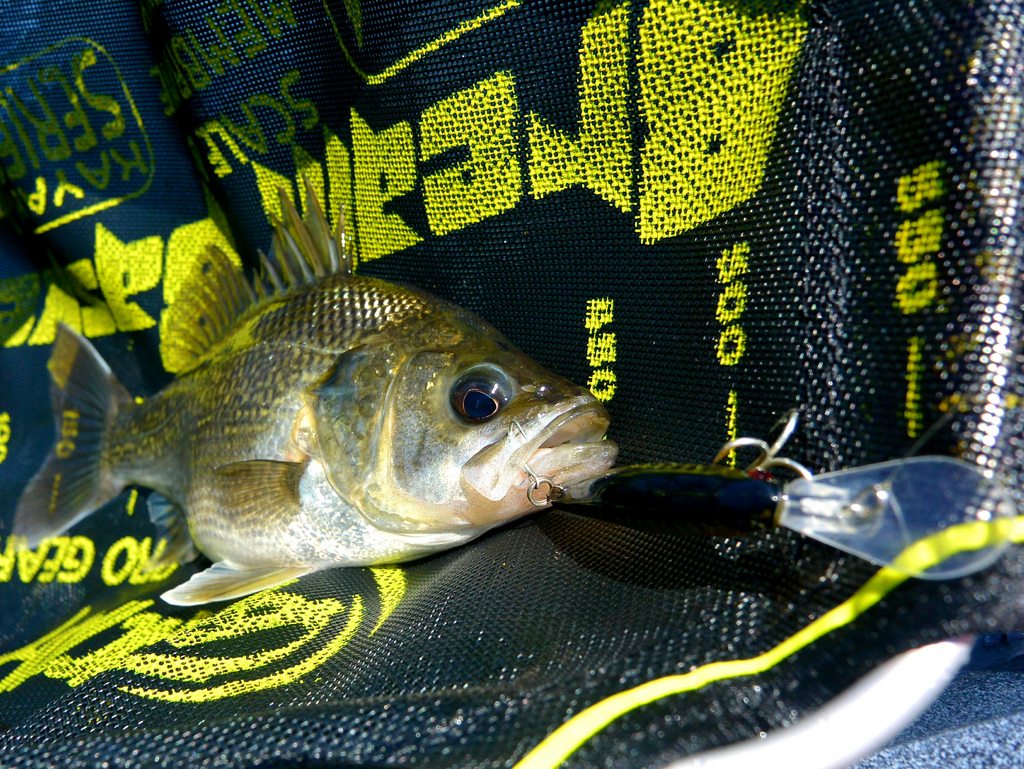 A bit of casting the Wasaby along the old bridge (and subsequently getting snagged on it), produced a few more big hits and solid bass. I find this kind of fishing more fun than vertical jigging, but not nearly as fun as top-water stuff which will be turning on any week now! 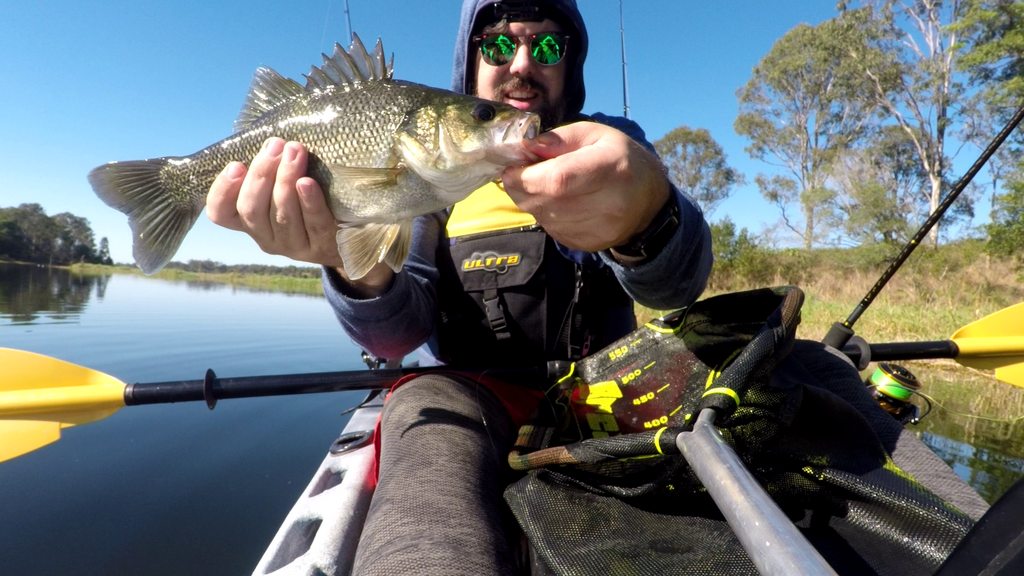 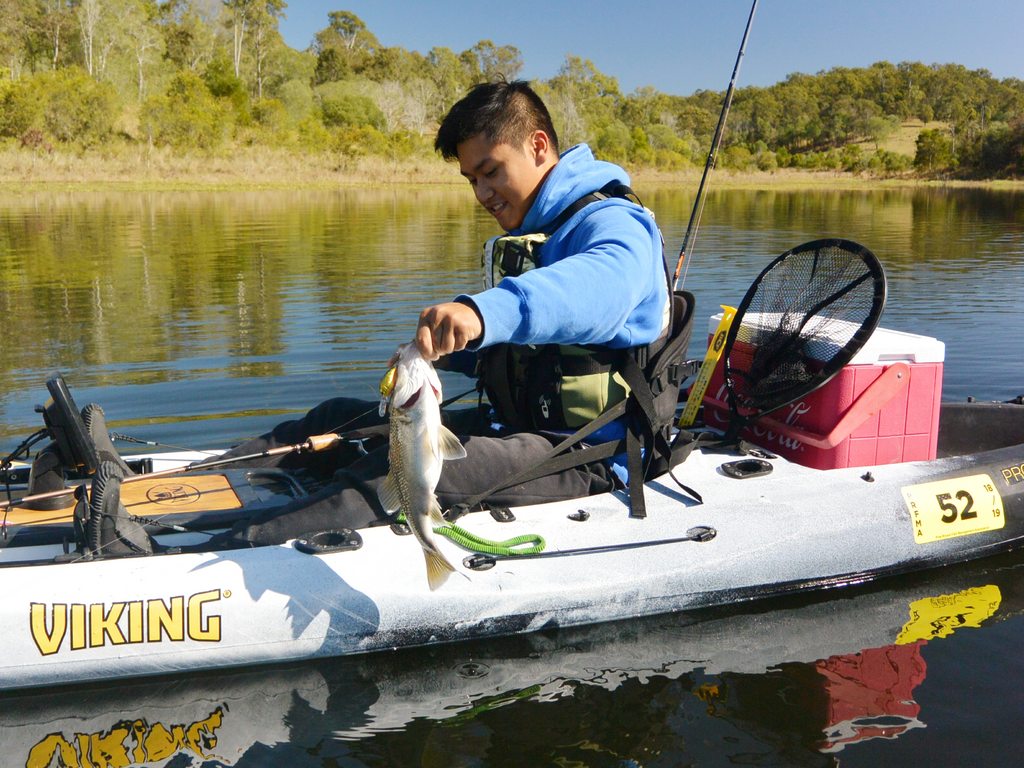 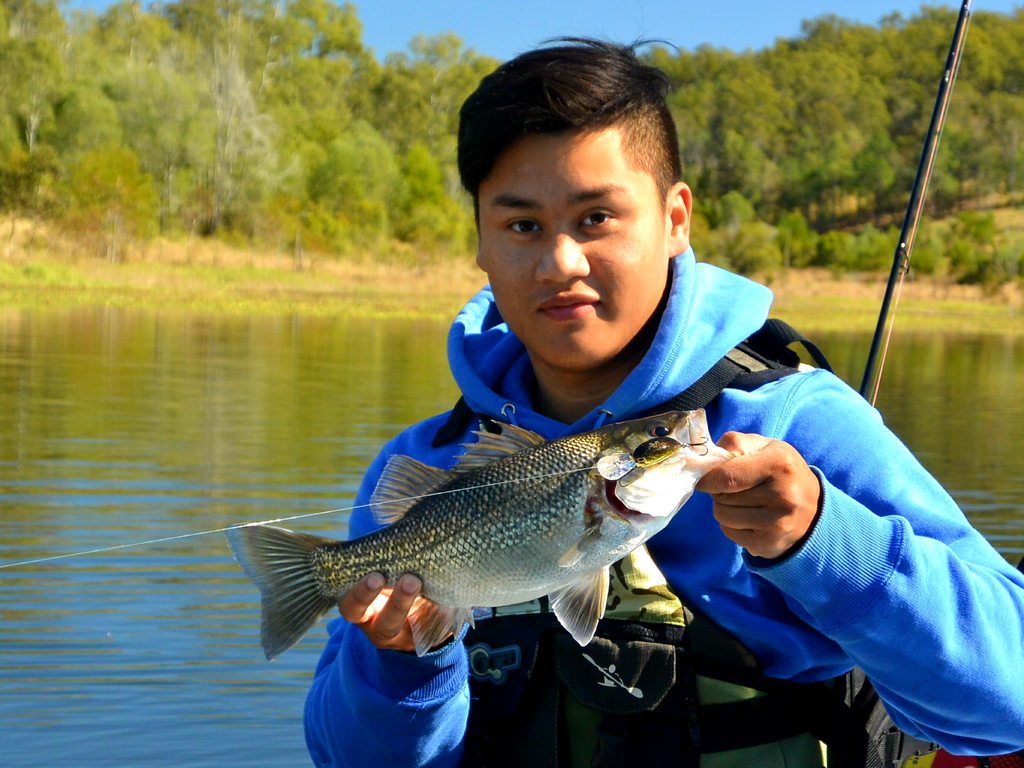 I pushed up Rush creek to get it mapped out for summer. The whole area is a playground built for bug-inhaling species like bass and toga, with all sorts of great structure, lily pads, and trees. 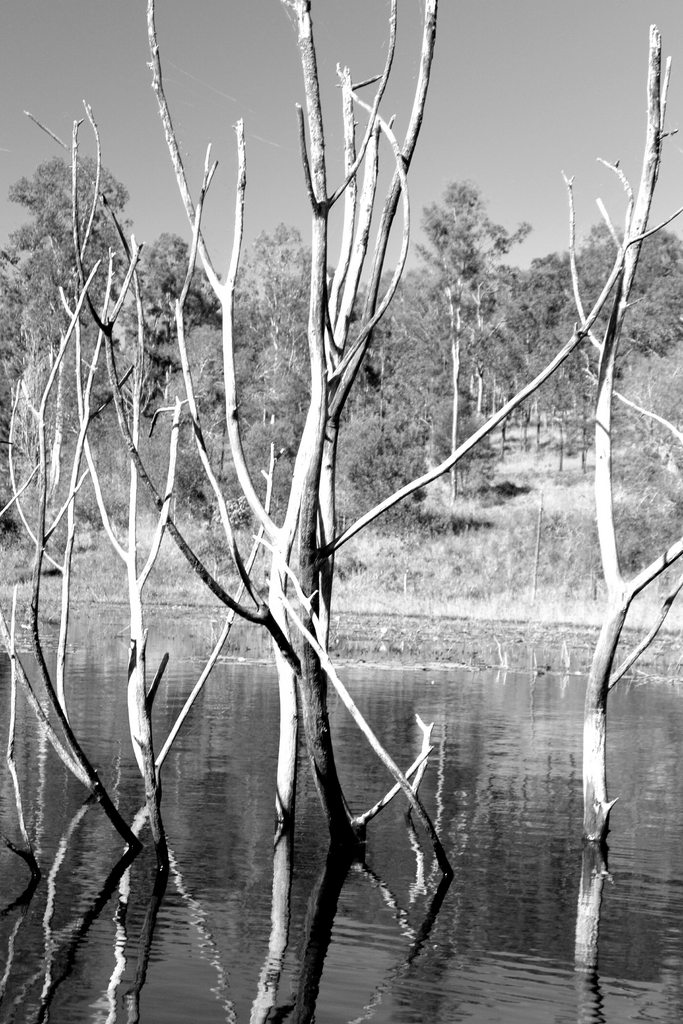 As we were swinging back around, the wind finally showed up and put a 10 knot kybosh on the glassy conditions. We decided to just troll down the other side of the lake to see a bit more on the way back. The points of the bay just opposite the launch point produced another two good bass on the Jackall, with the last bass coming in at a good 42cm, my best for the lake and only 3 off my PB. 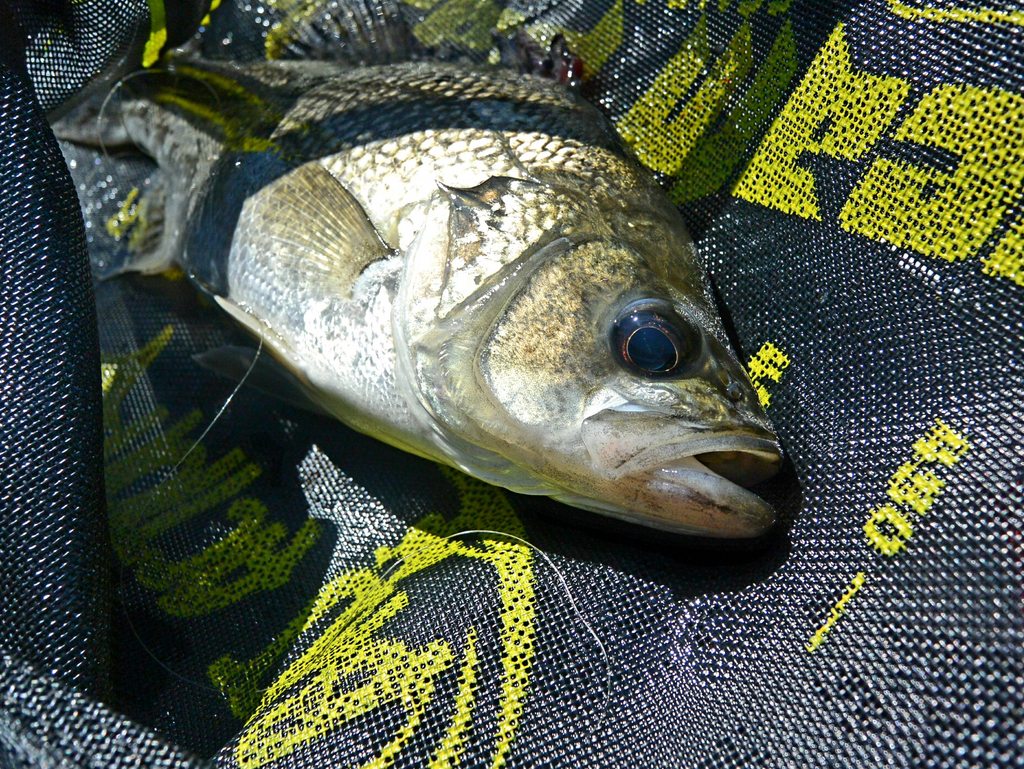 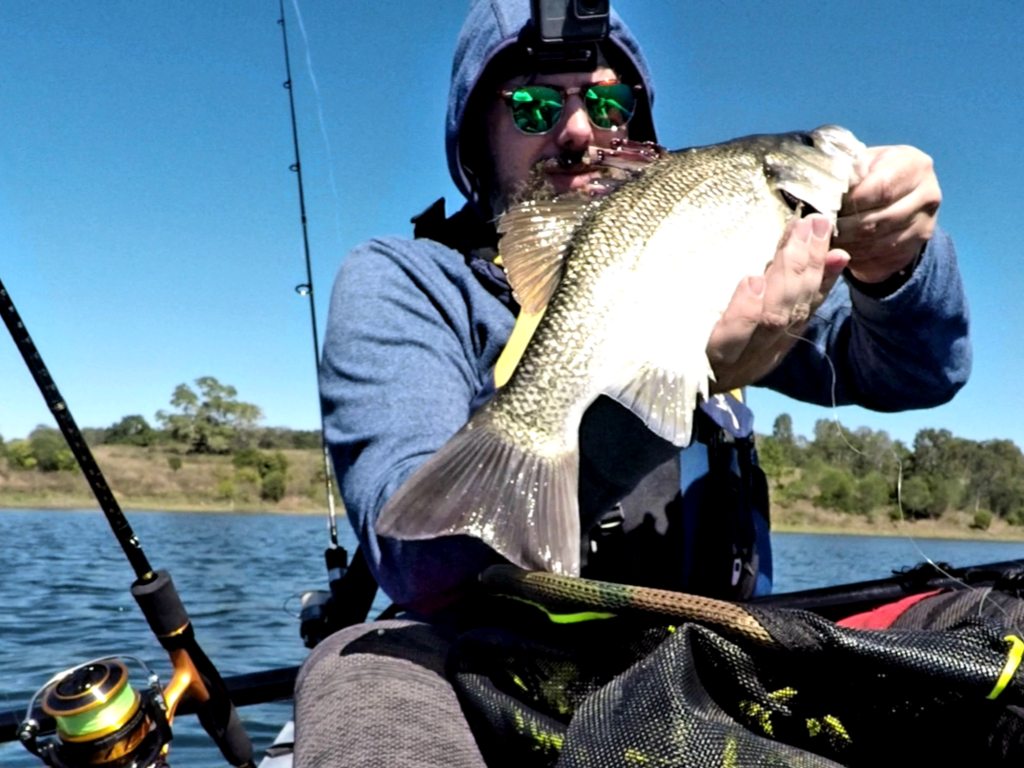 Finally, just as we were picking up our nearly empty red claw pots (we got one!), Darro's rod went off only metres from the ramp, loaded up with our second golden perch for the day. 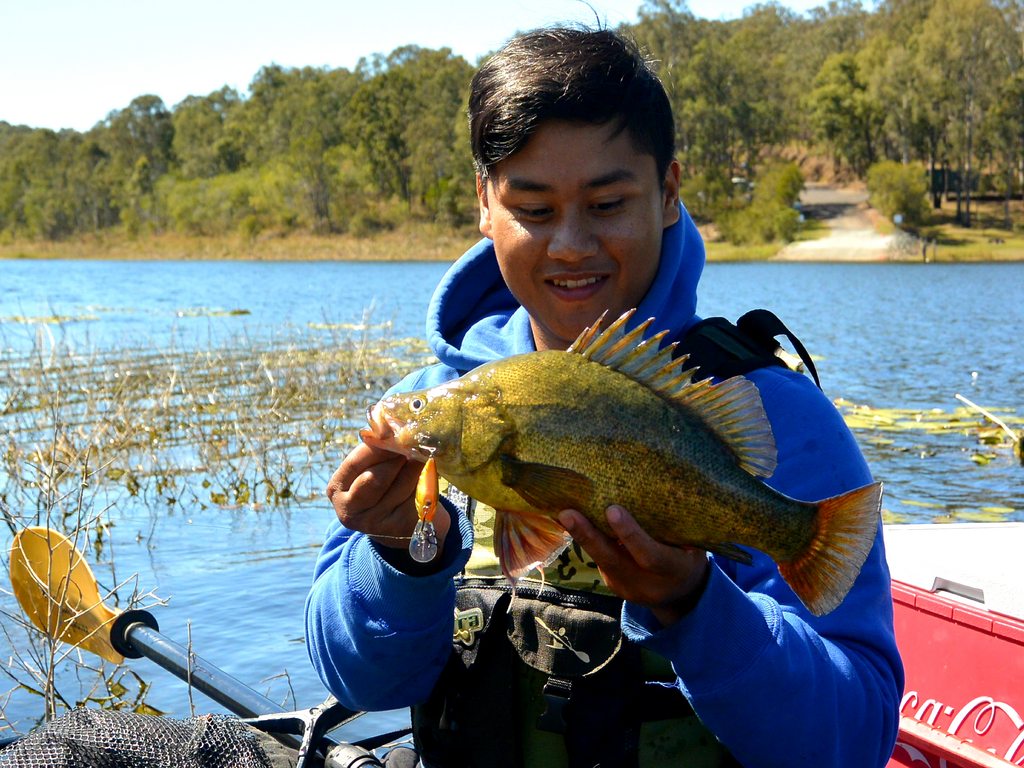 It was a smaller 40cm model, but had great colour and was destined for the dinner table. I'd never tried one, and despite not really fancying any freshwater fish this side of a rainbow trout, i figured it was worth a shot. 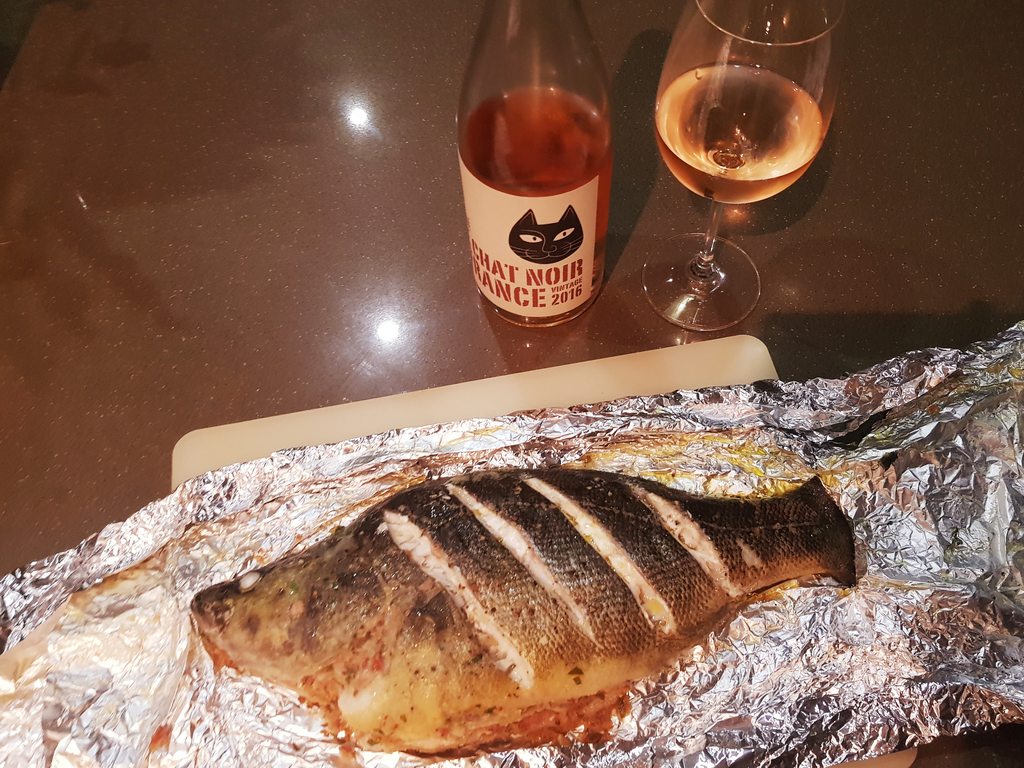 After cleaning the fish and seeing the lovely, light fat deposits, i figured it was a good candidate to be stuffed and baked whole (as i'd do with trout). The stuffing was bacon, pine nuts, onion, lemon zest and juice, and parsley, in plain breadcrumbs. The fish turned out wonderfully moist, the fat melting like lamb fat to baste the fish, with a very light taste and no muddiness detectable over the lemon zing (NPD does have very clear water). It's a very good-eating fish, right up there with trout, and above many saltwater species i've tried.

Went very well with a dry rosé, but i reckon a pinot gris would be even better!
Instagram
Youtube Channel
Top

Fresh is best, but I don't mind some salt every now and then!

A great trip Cubits. Finding your feet there, as you say, but a good way to find them with some nice fish in the yak.

Cracker of a session! Well done. I have yet to hit bass water since the season started ..... some time soon, I hope!

But our rivers are really low with no recent rain

North Pine Dam is a getting to know you sort of dam, a lot of people get a little frustrated when they cant find fish, its because the fish dont stay in the same place waiting for your visit once a month.Fish schools increase during winter but sometimes they are hard to find and even if you do find them, they wont touch anything on that day.Bass in north pine feed on boney bream and when the boney bream move out of our area (we have a third of the dam) we are left with the straglers. But overall it is a great fishery, one I cant get the money for my permit out of my pocket fast enough each year.
Dino
Fish while you can.
Dinodadog
I am not a bass addict but I am very fond of them
Top
Post Reply
5 posts • Page 1 of 1